Children and Vitamin D: What Parents Need to Know 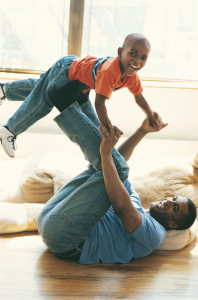 Vitamin D is a fat-soluble vitamin needed by the body to help maintain normal blood levels of calcium and phosphorus. By assisting the body with calcium absorption, vitamin D helps to create and maintain strong bones. Without adequate levels of vitamin D, bones can become thin, brittle, and misshapen.

Vitamin D can be obtained through the skin after exposure to sunlight or from our diets, but very few foods provide vitamin D naturally—with the exception of fatty fish such as salmon.[i] In fact, fortified foods provide most of the vitamin D in the American diet.[ii] For example, almost all of the U.S. milk supply is fortified with 100 IU of vitamin D per 8 ounces.

Rickets, an extreme form of vitamin D deficiency that affects infants and small children and is characterized by soft and deformed bones, was nearly eliminated in the United States when vitamin D fortification of milk was introduced in the 1930s. However, concerns about vitamin D status in the United States recently have resurfaced because of an increasing number of reports of insufficient dietary intake and signs of deficiency—both in children and in adults.

Based on findings from the National Health and Nutrition Examination Survey (NHANES), children living in the United States consume about 300 IU of vitamin D per day, on average, from both food sources and dietary supplements.[iii] In a fairly recent study published in the American Journal of Clinical Nutrition, researchers analyzed blood levels of vitamin D in 382 healthy children and adolescents. They found that 55% of the children had lower-than- recommended serum concentrations of vitamin D. They also noted that vitamin D blood concentrations dropped during the winter months as a result of reduced sun exposure. Overall, 68% of children had inadequate levels of the vitamin in their blood during the colder months when they spent more time indoors.[iv]

Risk factors for vitamin D deficiency in children include inadequate dietary intake of vitamin D; spending more time indoors, thus reducing their sun exposure; use of sunscreens, which block the synthesis of vitamin D; and other risk factors such as having a dark complexion or having been exclusively breast-fed during infancy.[vi]

Recommended Intakes of Vitamin D in Infants and Children

In 1997, the National Academy of Sciences’ Panel for Vitamin D—along with the Institute of Medicine—recommended a daily intake of 200 IU of vitamin D to prevent deficiency in healthy infants, children, and adolescents. At the time, this recommendation was endorsed by the American Academy of Pediatrics (AAP). However, nutrition experts, researchers, and pediatricians are faced with an emerging mass of scientific studies linking insufficient levels of vitamin D in the blood not only to bone demineralization and reduced calcium absorption, but to a wide variety of other health issues, including insulin resistance, impaired immune response, and other metabolic consequences—including a higher risk of certain cancers.

In fact, based on evidence from more recent clinical trials and a long history of safe use of vitamin D supplements, the AAP recently issued its own recommended daily intake for vitamin D that exceeds the National Academy of Sciences’ recommendation.[vii] The AAP now recommends that infants and children of all ages get 600 IU of vitamin D per day, doubling previous recommendations. As part of these recommendations, the AAP also acknowledges that, given the dietary practices of many children and adolescents today, getting 600 IU of vitamin D from diet alone is difficult to achieve. So to help infants and children meet their need for this important bone health nutrient, the AAP recommends daily use of a vitamin D supplement, beginning at birth for breast-fed infants and at 1 year for formula-fed infants.

[vii] Wagner CL, Greer FR, and the Section on Breast-Feeding and Committee on Nutrition. Prevention of rickets and vitamin D deficiency in infants, children, and adolescents. Pediatrics 2008;122:1142-52. http://www.aap.org/new/VitaminDreport.pdf